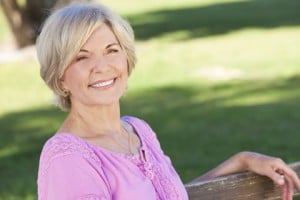 Oral health is an issue throughout our lives, and it becomes harder and harder to maintain our teeth and gums as we get older. The problem is, to some extent, that we just don’t know exactly what we’re dealing with, especially when it comes to postmenopausal women.

We know that women’s hormones can dramatically impact oral health because of the increased risk of gum disease and cavities during pregnancy, but we don’t know how menopause may also have an impact on oral health. But now researchers at the University of Buffalo have gotten a $4 million grant to find out.

“A Critical Gap in Knowledge”

One thing that it’s important to understand is that our mouths are actually environments or biomes like, for example, the rainforest, and like the rainforest they host a variety of life forms, hundreds of different bacteria that can either thrive or fail depending on the conditions of this microbiome. Understanding how changes in the microbiome affect the population of good, neutral, or harmful bacterial species can give us insight into why periodontal disease develops in some people and not in others, and why it sometimes becomes severe and other times doesn’t.

The University of Buffalo study will look specifically at the subgingival area of the gums, between the basal part of the crowns and the gums and attempt to understand the factors of this microbiome that control the populations found there.

The attempt is to gain a broader understanding that builds on the considerable body of knowledge that the University of Buffalo has been building about a large cohort of postmenopausal women. The Buffalo OsteoPerio Study, associated with the Buffalo Women ‘s Health Initiative conducted a baseline study from 1997 to 2001, conducted a five-year follow-up from 2002 to 2006, and plans to bring them back for a 15-year follow-up as part of the current study.

Using technology that was not available at the time of the initial studies, researchers will thaw and analyze subgingival plaque samples taken at the two previous visits and frozen. Because they already have comprehensive data on the subjects, they should be able to correlate information on the microbiome with a wide variety of personal and lifestyle factors, such as smoking, diet, obesity, diabetes, hormone use, and overall health.

Hopefully, their discoveries will give us new techniques to effectively fight gum disease, which, as they point out, is one of the most common diseases in older adults.

If you are suffering from gum disease and want to learn more about currently available treatments, please call 845-627-7645 for an appointment with Rockland County dentist Dr. Mark Dunayer at B & D Dental Excellence.