Medical knowledge has been steadily growing since ancient times. Many maladies that were once fatal are now curable and preventable using modern medicine. Dentistry is no exception. Throughout history, dental problems could result in death because there was no way to treat them and prevent infection from spreading. Writings from ancient Egypt suggest that the Egyptians practiced some form of dental care, but various excavated remains still show extensive tooth degradation that may have lead to death. 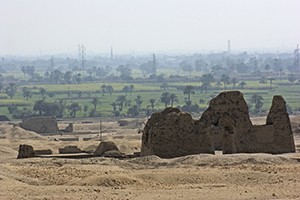 A male mummy discovered in Thebes in 1859 displayed a great deal of dental damage and decay. Many mummies from this time period show dental damage, which may have been due largely to the available diet. A primary food source for ancient Egyptians was bread made from flour ground on stone. Stone particles in the flour wore hard on tooth surfaces and pitted enamel. The exposed dentin would then be more susceptible to decay from the sugar-eating bacteria feasting on other foods like fruits and weak oatmeal-like beer. The mummies of commoners and nobility alike show similar tooth damage.

Researchers in the mid 1990’s used CT scans to learn more about the Theban mummy’s mouth. The scans revealed a linen mass between the first and second molars on the left side. At the time, the scans were too low of a resolution to give up more information than that. In 2012, a team of researchers at the University of Western Ontario were able to use modern CT scanning technology— much like that used in dentistry— to create high-resolution images. From these, they found that the linen mass appears to be a medicinal packet inserted into a large cavity forming between the two molars. The packet likely reduced his pain and kept out food particles, but could not offer a permanent solution. No teeth in the mummy’s mouth showed evidence of restorative dentistry.

Dentistry has come a long way from only being able to dull the pain of tooth decay. Restorative dentistry like white fillings, crowns, and veneers can fix problems and prevent further damage or decay from occurring. In this way, dentists can save you from pain and infections that could develop underneath damaged teeth. Your mouth will also benefit from preventative care such as regular cleanings.

You deserve quality dental care that utilizes the latest technology for your comfort. If you are looking for dental care in West Nyack, please call (845) 627-7645 today to schedule an appointment with a Rockland County dentist at B & D Dental Excellence.