As long as people have had teeth, we’ve been getting gunk stuck between them. Since objects similar to toothbrushes didn’t emerge until about 3500 B.C., earlier humans had to either ignore pesky food particles or be creative in their removal.

A recent archeological finding revealed that prehistoric humans indeed practiced rudimentary dental hygiene and shed new light on how they cared for their teeth. Even cavemen, it seems, cleaned their teeth (though after learning what they used, we should all be thankful for our modern, soft-bristled toothbrushes). 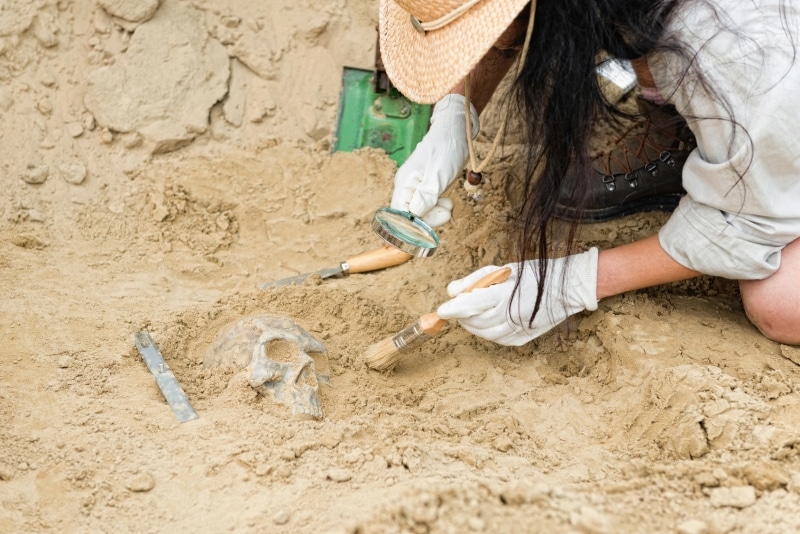 Archeologist Karen Hardy analyzed a jaw bone believed to be among the oldest human remains found in Europe. In studying the million-year-old bone, which was taken from a site in Spain, Hardy turned to the hardened dental plaque on the lingering teeth. We call this tartar or dental calculus when the hygienist is removing it from your teeth.

“Once it’s there it stays there,” Hardy said of the fossilized plaque in a Washington Post article. “It’s kind of like a tattoo of biological information—a personal time capsule.”

Hardy sought dietary details to help date the bone and determine the hominid species to which it belonged. She found signs of grass, seeds, and meat, all consumed raw. Then she noticed fragments of indigestible wood fibers.

The Right End of the Stick

Hardy’s discovery may help confirm what many researchers have long suspected: That early humans cleaned their teeth with small sticks that were either used in toothpick-like fashion, or that were split and frayed to scour the teeth and gums.

Other fossils of ancient, human teeth contain tiny holes often referred to as interproximal grooves. Scientists believe these grooves are the result of repeat cleaning using twigs like toothpicks. Modern chimpanzees, which are humans’ closest animal relation, are known to known to clean their teeth via the same method.

Hardy’s findings were published online earlier this month and will be printed in the February 2017 issue of the journal The Science of Nature.

This new evidence of early dental hygiene aligns with prior research that indicates ancient humans—the ones who ate uncooked meat and cleaned their teeth with dirty twigs—actually had stronger teeth and cleaner mouths than many people today.

A 2013 study demonstrated that as humans shifted from hunting and gathering to farming, disease-causing bacteria that feed on carbohydrates within the mouth prospered. This led to an increase in cavities and gum disease that was further fueled by the Industrial Revolution, when the addition of processed flours and sugars became prevalent.

Although our teeth today are whiter and straighter than those of the cavemen, modern humans have higher instances of tooth decay and periodontal disease. Fortunately, we also have more advanced—and more comfortable—tools to help us care for our teeth. And our processed diet also reduces the amount of wear on our teeth, so it’s actually possible to keep all our teeth for a lifetime, even if we live 100 years, about twice as long a our ancestors. And if we don’t keep all our teeth, we can replace them with dental implants.

Selected as one of America’s Best Dentists for 2016, Rockland County dentist Dr. Mark Dunayer is dedicated to helping patients achieve and maintain healthy smiles for life. Please call B & D Dental Excellence at (845) 627-7645 to schedule your appointment at our West Nyack, NY, office or to learn more about our cosmetic dentistry services.