Researchers at the University of Southern California have announced that they have imaged sleep apnea as it happened for the first time in history. In order to accomplish this feat, they say they had to redesign the MRI, but now they hope that this realtime imagery can lead to a more detailed sleep test that will lead to more effective sleep apnea treatment.

The Problem with MRIs 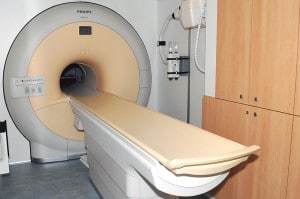 Magnetic resonance imaging (MRI) is a great tool for looking at the airway. It is capable of picking up numerous details of all structures in the throat, including fat, muscle, nerves, and more, based on the varying density in the tissues. The problem is that it takes up to three minutes to complete this detailed scan. This is far too long to capture an apneic event as it happened. The crucial period for imaging sleep apnea required that an MRI could be triggered after an apneic event was detected, then be completed in about half a second or less.

In order to reduce the scan time by more than a factor of 300, they had to reprogram the MRI to look at just what they wanted: the difference between solid tissue and open airway. By reducing the detail sufficiently, they were able to catch the moment of apnea.

Being able to precisely look at apnea as it happens would allow us to see precisely what anatomy is involved in causing apnea. Multiple scans could be performed each night to get an idea about whether it’s just one combination of anatomy causing the apnea or whether there are multiple apneic configurations that may alternate. This could be very useful for determining whether particular sleep apnea appliances might function for a certain individual. It would be especially useful for planning of surgical treatment, which in many cases is as likely to worsen sleep apnea as to improve it.

The good news is that although we may not be able to precisely see the detailed anatomy participating in your sleep apnea in realtime, we can still make highly accurate recommendations about whether you will benefit from an oral appliance. If you would like to learn more about sleep apnea treatment in Rockland County, please call 845-627-7645 for an appointment at B & D Dental Excellence in West Nyack.