With the annual celebration of jazz and blues in Rockland County known as Nyack Jazz Week just around the corner, it’s only fitting to talk about one of the founders of the bebop music style/movement, Chet Baker, and how the loss of his teeth and need for dentures impacted his career. 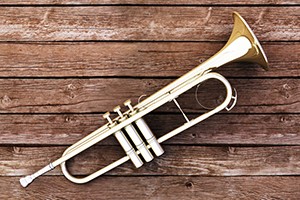 Chesney Henry “Chet” Baker, Jr. (December 23, 1929 – May 13, 1988) was an American jazz trumpeter, flugelhornist and vocalist.  He earned critical acclaim through the 1950s, both for his music and his frequent run-ins with the law over his drug habits.

His drug habit and his music talent collided one night in 1968 when he was allegedly approached by an acquaintance extorting money, and Baker suffered a dental injury in the altercation.

While the exact sequence of events is not clear, it is certain that his drug use damaged his teeth and gums, leading to rapid deterioration after the incident.  Some existing footage suggests he played with one missing tooth shortly after the attack, and he could have had other decayed teeth removed soon after.

Playing trumpet depends on having a proper embouchure, the shape of the lips against the mouthpiece, which in turn depends on the player’s unique dental structure, lip shape and size, jaw shape and the degree of malocclusion. Baker’s dental problems impacted his embouchure and made it hard for him to play.

According to his wife, Carol Baker, he didn’t play a note for several months after his injuries, taking odd jobs to fill his time and earn money. He was arrested on another drug charge, but the judge, a former trumpet player, released Chet after five month’s detention on condition that he enter a methadone program. When Chet was released, he took stock of his life and decided to devote himself to his art again. He got fitted for dentures, worked on his embouchure, and relearned how to play the trumpet.

Although his dentures affected his music, he managed to play, and in 1973, he felt confident enough to attempt a comeback. He relocated to New York City and began performing and recording again, although nothing he produced at this time matched the acclaim given his previous works.

Playing any wind instrument is dependent on the condition of your teeth and your jaw. Whether you’re a professional or amateur musician, losing your teeth doesn’t have to be the end of your musical career. We can design dentures that will preserve your embouchure, and even use dental implants the make sure your dentures stay in place under the stresses of playing.

While you’re out enjoying the jazz this weekend, take some time to think about all the things your teeth do for you beyond just smiling and chewing. And if you need help caring for your teeth or need dentures in Rockland County, please call (845) 627-7645 for an appointment with a cosmetic dentist at B&D Dental Excellence in West Nyack.