Flossing Between the Lines: Water Piks Vs. String Floss

One of the most common things that people hear during a dental cleaning is that they need to floss more to help protect against gum disease. For many people, flossing is a difficult process. Being able to gently clean between the teeth, pushing just hard enough to infiltrate periodontal pockets (between the gum and tooth) without abrading the soft tissue, all while not cutting off finger circulation is like juggling glasses full of water. Fortunately, floss is not the only mode of cleaning between teeth. Oral irrigation devices, commonly called water piks after the release of the WaterPik oral irrigator in 1962, offer an alternative to traditional floss.

With the availability of two flossing options, many patients ask which is the more effective flossing option? Research shows that both are effective. Which is right for you depends on what you’re looking for in a flosser.

Waxed or unwaxed floss are both effective plaque-removing tools. Nerves in the periodontal ligament, a strong connective tissue creating a protective seal around each tooth, deter from flossing deep enough to cause permanent damage. Cutting the gums with floss should decrease over time as a person learns the right amount of pressure to apply.

Oral irrigation devices use a pulsing water stream to remove plaque from teeth and around the gum line. Like floss, oral irrigators clean gum pockets, but remove the risk of cutting by pressing too hard. A study by Dr. Caren Barnes of the University of Nebraska in 2005 on the effectiveness of oral irrigators found that, combined with tooth brushing, water flossing is an effective alternative to string floss. In her study, both types of flossing were found to remove comparable amounts of plaque and other biofilm.

These devices are helpful for people with braces and oral spacers as well. Using ordinary floss around braces can be difficult because people have to work around the brackets in their mouths without tangling the floss around them. Children may also find water flossers to be easier to use, increasing their likelihood of making flossing a regular part of their oral care.

It is important to note that flossing around dental implants calls for more delicate flossing than flossing between regular teeth. The natural seal around teeth is replicated by a periodontal soft-tissue seal that is not as strong as the periodontal ligament, and is more easily breached. For flossing around implants, oral irrigators on low settings are recommended for people who may have a tendency to press too hard with ordinary floss. 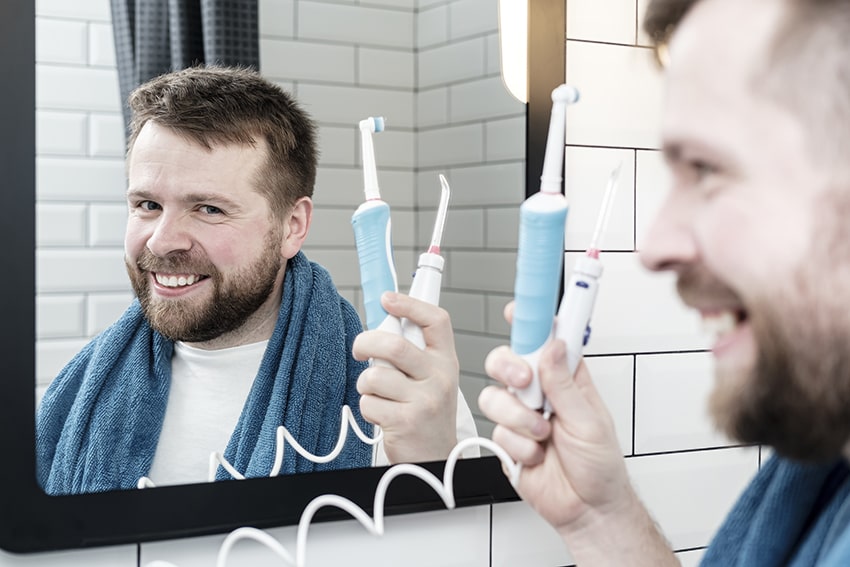 The Importance of Consistent Flossing

People who do not floss regularly may develop gingivitis, an inflammation of the gums (gingival tissue) commonly caused by a buildup of plaque and bacteria along the gum line. Gingivitis may cause bleeding and tenderness of the gums, and can lead to more serious periodontal diseases that eventually cause tooth loss. Despite the looming threat of tooth loss or other painful complications, only 13.5% of Americans claim that they floss regularly. If you are one of the Americans who does not floss regularly because ordinary floss is difficult or time consuming, ask your dentist about what water flossing could do for you.

To learn more about creating a dental care regimen that best suits your needs in Rockland County, please call (845) 627-7645 for an appointment with a dentist at B & D Dental Excellence in West Nyack.