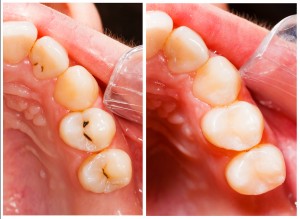 Tooth colored fillings, known as composite fillings, have steadily become more common in dental practices since their appearance three decades ago. These white fillings are a popular choice because they can be mixed to match the surrounding tooth, making restoration work less visible. Due to their relative newness, many people may not be aware of the benefits that composite materials have over silver-colored amalgam fillings. Clearing up some misconceptions surrounding composite materials will help people who want to preserve the look of their smile without compromising the health of their teeth.

Amalgam Are Stronger Than Composite

When they first made their way into dental practice, composite fillings were much weaker than amalgam fillings. Getting white fillings meant sacrificing longevity for visually appealing teeth. Composite fillings often cracked and chipped from bite pressure and thermal expansion, leading to premature failure of the filling. As a result, composite fillings were usually relegated to filling smaller cavities in the front teeth. Molars were almost always filled with amalgam material that could withstand the pressure of chewing.

Composite fillings have come a long way. Recent studies have shown that amalgam and composite materials show similar wear over time. Thanks to their increased strength, it is possible to successfully use composite fillings even in back teeth.

A factor that may have some people concerned is that white fillings can develop stains over time. It is true that the same staining that discolors natural tooth surfaces over time can also tint white fillings. Fortunately, adding a protective sealant layer over the composite can prevent staining.

When it comes to staining, amalgam fillings are even worse because they rust, turning black. This can make them look as bad as or worse than the decay they are replacing.

The weakness of composite when compared to amalgam fillings once meant that white fillings would fail faster than amalgam, but that is no longer the case. Their added strength is not the only property that has increased the longevity of white fillings. Fixing cracks and imperfections in composite fillings is easier than with amalgam. The composite material forms a bond with the tooth. Composite material added on later will form this same bond with not only the tooth, but also with the preexisting restoration.

Amalgam fillings do not form this bond with the tooth. In order to repair a metal filling, it is necessary to remove the old filling first. When an amalgam filling fails, replacing it with composite materials should be considered.

In cases where too much of the tooth’s surface has been removed or damaged, we can consider ceramic fillings made using our CEREC system, such as porcelain inlays, onlays, or a dental crown.

Other Benefits of Composite Fillings

Choosing composite for dental restorations usually results in less damage to tooth structure. Metal fillings have certain size and shape requirements for the holes that they fill. To fit these requirements, healthy parts of decaying teeth may be removed in preparation for the placement of the filling. Composite fillings do not have the same size requirements, making them a better option for preserving the structure of the tooth.

They also have a thermal expansion and contraction rate more similar to natural tooth material, reducing problems like microcracking and percolation that can lead to decay around amalgam fillings.

And, of course, tooth-colored fillings don’t contain mercury, a toxic metal that migrates out of fillings into the body.

Now that white fillings do more than hide dental restorations, they are an excellent choice for filling your cavities. If you want to learn more about what white fillings can do for you, please call (845) 627-7645 for an appointment at B & D Dental Excellence in West Nyack.